@Poriwinkle is going to host a contest based on your warframe! Grand Prize is 100p and all frames will be judged by

Fourth Place: Sapphirus “With the golden orokin, plus the Arcturus Syandana and Titania’s Noble Animation, I’ve created the “Ultimate Orokin Elite”, which includes all the Warframes that are currently discovered and those that are yet to be seen, and that then will became mastered by the Tenno to be part of the “Ultimate Orokin Elite”. This is just one of those that are so called “Elite”. They wield the power of the “Ancient Civilization” and they will be the ones bringing peace and order to the Solar System.” 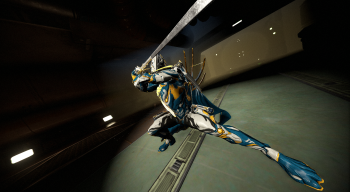 Third Place: Cowardly_Tryhard “Overall theme is reminiscent of skinless flesh. Prior to Nidus’ release, DE Steve noted the Accent portion of his design was very muscle like and reminded him of Attack on Titan. His observation inspired me to make this bloody masterpiece. “

Seventh Place: Dane “i liked the white and purple and since the anniversary came and went i decided i might as well make a lotusy looking octavia” 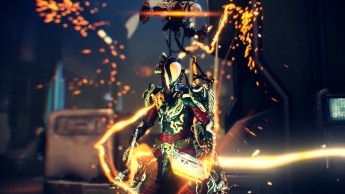 Fifth Place: Brahki “The aim for this one was kind of a Kuva theme. Drank the koolaid at the overall style that the new enemy type had. Made a few changes here and there (White to offset the bland original style) and kept with the theme of “Grineer and bits of Orokin”.” 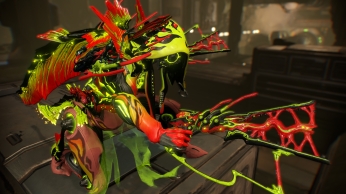 Second Place: Darkcrystalc “I see alot of 2 toned ivaras running around(I even started off with a black and smoke white colors first couple days) and saw someone with black and dark green and thought “she looks like a toad”. I thought about it and figured out she has fading colors on her frame and decided to make her look like a poisonious tree frog. She’s been my favorite frame ever since.” 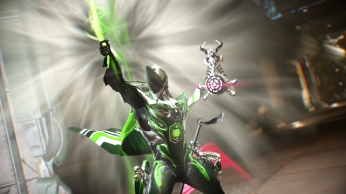 First Place: Surry “They were too late, Alad V had already completed his work, she was a perfect specimen of corpus robotics. No longer a warframe, the perfect crewman. Armed with an energy saw she makes a formidable addition to the corpus collective. Production has already begun to mass produce the new obedient army based on the original.”

All writers are members of our gaming community. We highly value their time and effort into bringing you well-composed content. Royal Destiny is always about working together into making something great. If you’re interested in writing for us, please contact a staff member on our Discord server.